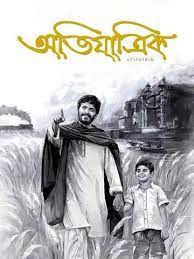 This is not a movie!

It is a painting and a poem in the format of a movie!

It is a nostalgic revisit to an era almost lost, yet forever cherished in the heart of Bengal.

It is a tribute to the quintessential part of being Bengali.

That delicate balance between the eternal wanderlust and the craving for home.

But most of all, It is a romance!

A romance, transcending eras, a beauty brought to life in monochrome.

A romance of the camera and screenplay, the vivid look and feel of the sets and costumes, the subtle, meaningful dialogues and the absolutely wonderful background score… its effect, trancelike on the audience!

Arjun Chakraborty as Apu is every bit the beloved hero of our inner selves, walking the path of dreary reality, yet retaining that dreamy sensibility of wonderment.

The actors in big and small roles all deserve a bow.

But a special round of applause belongs to the one man who dreamt big and had the conviction to bring this all together and make this beautiful movie happen. To attempt to start at the end of Satyajit Ray’s Apu Trilogy and present the sequel to it, covering the last bit of Bibhutibhushan Bandopadhyay’s epic novel “Aparajito” is no easy feat. Yet not only did the Director who incidentally also wrote the screenplay attempt this, he simply excelled!

From getting his dream project produced by Madhur Bhandarkar and Gaurang Jalan to assembling a delightful cast, Subhrajit Mitra has indeed gifted the audience with a movie which won 28 international laurels and would be talked about in times to come.

A movie that tells us that Life is the greatest romance and definitely reaches straight to our heart.

A path breaking movie that should be watched more than once.

4 thoughts on “Avijatrik ( The wanderlust of Apu)”