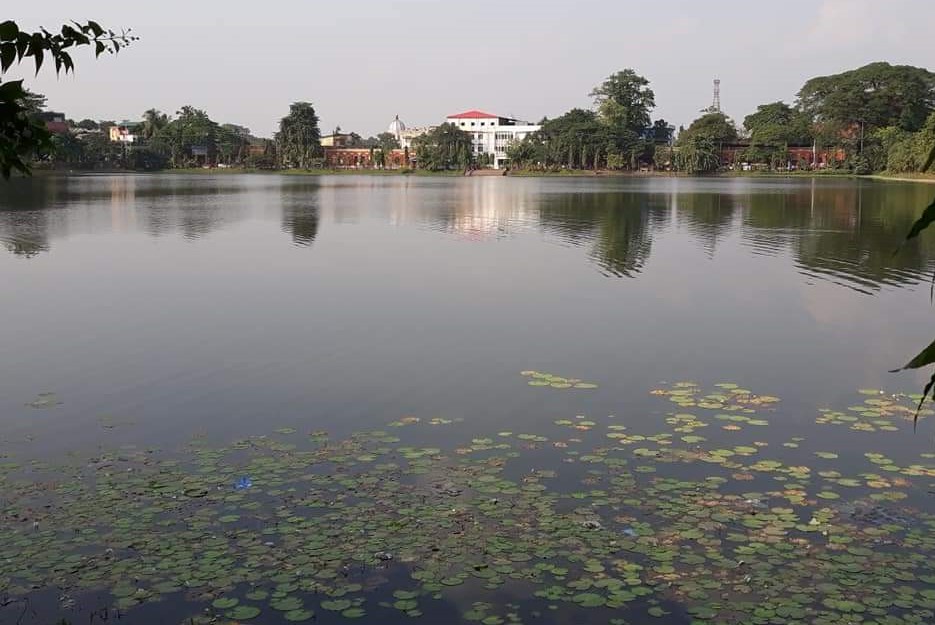 Of ancient cities and timeless traditions
Of gentle weaves and mellow sunsets
Of wired fences cutting through common grounds
Of sweetmeats and sweeter people
And paddy fields that embrace two nations..

November before last.
Cyclone Bulbul raged the whole night
And yet we were determined to set out on our trip back to history…
Something that I did quite a few times that year, traversing this ancient land of Bengal, soaking in her rich heritage.
That November, the destination was Coochbehar.

A princely state during the British era, Coochbehar traces its history to the ancient Kamrupa kingdom of Assam.  Later the area became a part of the Kamata kingdom, first ruled by the Khen dynasty from their capital at Kamatapur. The Khens were an indigenous tribe, and they ruled till they fell to Alauddin Hussain Shah, During this time, the Koch tribe became very powerful and proclaimed itself Kamateshwar (Lord of Kamata) and established the Koch dynasty.
However in the course of history, the Kamata Kingdom was divided into Koch Behar and Koch Hajo .Koch Behar aligned itself with the Mughal Empire and finally joined the India as a part of the West Bengal, whereas remnants of the Koch Hajo rulers aligned themselves with the Ahom kingdom and the region became a part of Assam.

But on that clear morning, after the heavy rains, as we drove northwards from Bagdogra towards Coochbehar, paddy fields on both sides, separated by a tall, wired fence… West Bengal on one side, Bangladesh on another, we couldn’t help but wonder how transient it all is…how time divides… and shapes us all…

It was a little before partition of India and the resultant division of Bengal, that Shri Krishna Das Banik left his native Dhaka and settled in Coochbehar.
He brought with him the recipe for the delicious “Pranohara” a delectable sweetmeat made of chena (hung curd) and rose water.
Krishna Das Banik has three sweet shops in Coochbehar today and his grandsons continue to feed the town their favourite Pranohara.

Cooch Behar town as we see it today, is largely the creation of Maharaja Nripendra Narayan Bhoop Bahadur.. Maharaja Nripendra Narayan was an infant when he ascended the throne. Like many other fiefdoms in Bengal the administration was carried out by the British in the name of the King. Nripendra Narayan was educated in England and largely influenced by Western liberal thoughts and practices.. He was married to Suniti Devi, the daughter of noted social reformer and one of the founders of Brahmo Samaj, Keshab Chandra Sen. King Nripendra and Suniti Devi bought enlightenment and progressive values to Cooch Behar. They built schools for girls, hospitals, ashrams and law courts. Their son Jitendra Narayan married Princess Indira Devi, daughter of Maharaja Sayajirao Gaekwad of Baroda. They too contributed to the modernisation and added to the riches of Coochbehar

It was eventually Maharaja Jagaddipendra Narayan, the son of Jitendra Narayan and brother of Maharani Gayatri Devi of Jaipur, who had to transfer full authority, jurisdiction and power of the state to the Dominion Government of India, effective September 1949. Eventually, Cooch Bihar became part of the state of West Bengal on, with Cooch Behar town as its headquarters.

Coochbehar town fascinated me.
Remnants of a bygone era.
The warmth of the place was still a little shielded from the big city madness, yet at one time this used to be the seat of power of the Princely State worthy of 13 gun salutes.
West Bengal  Heritage Commission  in collaboration with IIT Kharagpur has infact declared certain sites as Heritage Sites here .The District Heritage Committee is  also  working on a list of 155 Heritage sites with the  ultimate aim to declare Coochbehar town as Heritage Town.

The architectural splendour remains.
The Jenkins School Building, the MJN Club, the Post Office building are spectacular architectural beauties, but nothing quite  prepared us for the marvellous structure of the Victor Jubilee Palace or Coochbehar Rajbaari as it is commonly known.

Built in 1887 by Maharaja Nripendra Narayan Bhoop Bahadur, the palace  was built was built in Italian renaissance style, with a huge Durbar Hall, Ballroom, Billiards room, a great library and around 18 bedrooms.
Maintained by the Archaeological Survey of India, a small part of the Palace is now open for public viewing .As one pushes the tall teak doors and slivered door knobs to go into what once used to be the Durbar Hall, and stand under its central dome with Corinthian columns supporting the base of the cupola, one looks up in awe. One could easily be standing inside a magnificent historic site in Europe.

Another beautiful spot in the quaint and historic town was the Sagar Dighi. “Sagar Dighi” translates to mean “Ocean Lake”. It is, infact a spectacular tank surrounded by grand structures all around. The buildings, built mostly between the 1880s and 1920s, are now offices of the district administration. In the evening Sagar Dighi area comes alive with food carts and temporary stalls being set and people come in crowds to enjoy the ambience.

The next day we set out on a shopping spree.. In case one likes ethno heritage art and craft, one is spoilt for choice here.
In and around Coochbehar, art is abundant. From the looms for weaves at Tufangunj where exquisite cotton sarees are woven,  to handmade Sitalpati craft , not just the rugs or “patis” as we call them locally, but very usable bags , coasters, table mats are manufactured , right from growing the plant to the end product , the Shola craft at Bataguri . Creativity is everywhere in and around Coochbehar.

After absorbing the local craftsmanship we drove up to
another beautiful Temple about 10 kilometres ahead of Coochbehar. .This was the Baneshwar Shiv Temple. The temple has a ‘Shivalinga‘ 10 feet below the plinth level. Another temple inside the Baneshwar Shiv temple is where ’Ardhanariswar’ is worshiped. ‘. Ardhanariswar is the composite male-female synthesis of Shiva and Parvati. It represents the synthesis of masculine and feminine energies of the universe (Purusha and Prakriti) and is considered to be the root of all creation.

That evening when the moon was full and magical, we went to see the Raash Festival at the Madan Mohun Jiu temple.
Rash Mela in West Bengal is a festival celebrating the divine love of Sri Krishna and Sri Radha. Celebrated on the full moon day in Kartik month, the Rash Yatra is a procession with clay deities of Lord Krishna and Radha. The parade demonstrate the life of Lord Krishna, his various miracles and deeds. The Rash Mela is an annual fair that is very famous in the Nabadwip, Cooch Behar and Sundarbans.

In Coochbehar Rashmela is one of the main festivals and is celebrated with devotion and beauty at Madanmohun temple popularly called Madanbaari.
The Madanbaari temple complex has a dazzling white one-storeyed structure as its centrepiece. It’s a fine blending of Hindu (low, sprawling porch in front), Islamic (scalloped arches and bulbous pillars) and Central Asian (dome with tapered peak) architectural traditions. Built by Maharaja Nripendra Narayan, the deities residing within the premises are Madan Mohan Jiu , Ma Kali, Ma Bhavani and Ma Tara.
It is an unique coming together of Bhakti and Shakti worship traditions of Sanatan Dharma.

The month long Rash Mela starts with the rotation of the grand Rashchakra.
The Raashchakra or The holy wheel is a structure built during the Raashmela that is held in honour of Lord Krishna or Madanmohan in Cooch Behar, India. From the time of the Maharajas, the Raash Chakra in Cooch Behar is made by a Muslim family of Ghughumari area every year.
A symbol of secular mood in the district, this Raash-Chakra is a semi-cylindrical structure made out of paper and bamboo posts and symbolises brotherhood irrespective of the religious diversity. It resembles the Dharma Chakra of the Buddhists and thus it unifies the Santana Hindus, Buddhists and Muslims in a single chord of harmony.

In many ways inclusion has always been a tradition in Bengal. Ruled by Buddhist kings, Muslim Nawabs and Hindu kings Bengal has always soaked in all traditions.
No wonder it was the seat of so many social reform movements from The Bhakti Movement of Shri Chaitanya and Shri Ramakrishna to the Brahmo Samaj movement of Raja Ram Mohan Roy.
Bengal is a  treasure of  historic landmarks, yet it remains  quite unknown to anyone beyond the locals
It’s glorious architecture and cultural heritage is not just the responsibility of a few custodians but truly belongs to all of us now .It is really up to us the people to be responsible for our common inherited legacy.
And as the Royal insignia reads “Jato dharma, stato jai”
” So long as there is dharma (true justice) there will be victory”
May this and the rest of my beloved Bengal be forever blessed with Dharma or true justice for all.

8 thoughts on “A Beauty called Coochbehar”